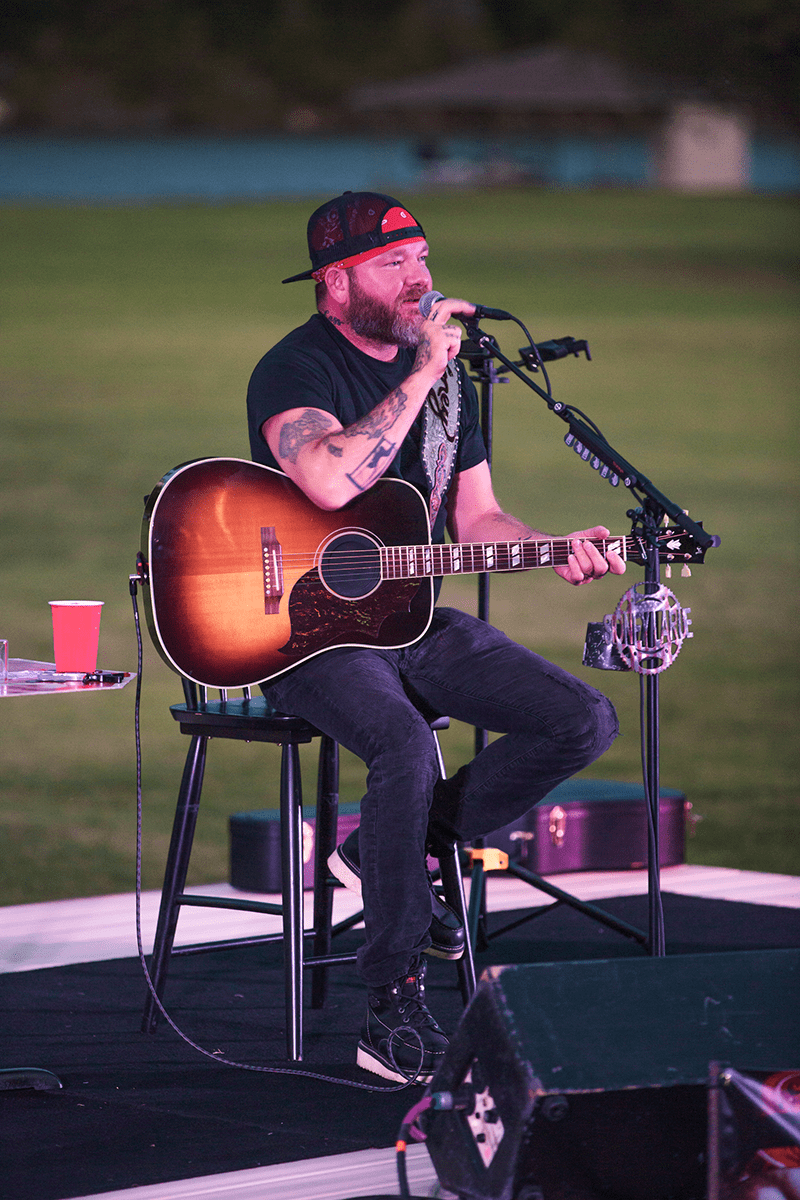 Add this Playlist to Your Spotify Texans can be a braggadocious bunch. We boast about our barbeque, our beer, our beautiful state and its people, and perhaps most of all, our music.

Yes, we really love those folks, but that’s not what we’re talking about (well, we’ll talk some Willie, but I digress).

What is Texas Music you ask? Well, to give it proper treatment would require a War and Peace length expose, but I’ll do my best to give a brief, but proper education.

Texas Music, using its broadest definition, encapsulates a rich regional music scene that’s more about attitude, geography, and history than slotting itself to a particular sound. Being a giant melting pot of genres, one can find anything from country, blues, rock, Tejano, folk, roots, creole, punk and “red dirt”; but, more on that later.

Traditional country themes of hell raising, heartbreaks and barely gettin’ by are undergirded by the anti-establishment attitude that laces most of Texas culture. Heavy nods to people, places and happenings unique to the Lone Star State are often woven in by naturally resonating with Texans’ life experiences. Its production usually takes a “less is more” approach, forgoing the heavy effects and loops that dominate mainstream pop and country in favor of a more raw, unrefined sound. Among artists, there is an acknowledgement of history and a true appreciation for the Texas songwriters of the past who paved the way by cultivating a loyal fanbase of passionate listeners.

Roots of the Scene Take Hold

The 1970’s arguably was the time the seeds of the modern Texas music scene were planted. While credit is due to Texans Willie Nelson, Waylon Jennings, and George Jones for birthing the outlaw country genre, those household names were merely the mainstream facade of deeper happenings.

In Austin, a music scene of unbridled talent was assembling in a haze of booze and drugs. Changes in the law allowed establishments to start selling liquor, turning the downtown beer joints into thriving night clubs. It was dirt cheap to live in Austin back then, so naturally it attracted musicians and other hangers-on to mingle with the politicians and ranchers. It’s when Austin got “weird” as they say, when music and art flourished not only on Sixth Street, but outside the Austin city limits as well. Epic house parties were the norm, with musicians gathering after the bars closed to song swap until sunrise. Folks like Ray Wylie Hubbard, Rusty Wier, and Gary P. Nunn latched on and ran the gauntlet, establishing themselves within outlaw movement. At the center of the party was a native New Yorker turned Texan that went by the name Jerry Jeff Walker.  Bold and charismatic, Walker told stories and wrote songs that would captivate crowds and make it rain beer. In August 1973, Jerry Jeff and his buddies recorded what is considered to be the seminal record of the Texas country movement.

Viva Terlingua was captured over the course of several hot August nights using a makeshift recording setup inside the non-air conditioned Luckenbach dancehall. Its brilliance is partially attributed to the “gonzo” method in which it was recorded – unfiltered, unguided, but purposeful in execution. The live album birthed several Texas music party anthems including Walker’s “Sangria Wine” and “Gettin’ By,” Gary P. Nunn’s famous “London Homesick Blues” and Ray Wylie Hubbard’s “Up Against The Wall Redneck Mother.”

Meanwhile in Nashville, a pair of young songwriters, Guy Clark and Townes Van Zandt, spent a few years going the traditional route, making records and scraping by in The Music City. Eventually they moved back to Texas to join their brethren, and while the best friends never found that fame and fortune, they achieved legendary status among their peers for their unrivaled ability to mix melody and poetry. Songs like Clark’s “LA Freeway” and Van Zandt’s “Pancho and Lefty” have been covered too many times to count, and are always included in the list of Texas Country standards.

The Birth of Red Dirt

As the decade turned over, a quieter but equally powerful movement began in the college town of Stillwater, Oklahoma. While the term “Red Dirt Music” is now casually used synonymously with “Texas Music,” its origins are distinctly Oklahoman. A cast of unknowns led by Tom Skinner, Bob Childers, Jimmy LaFave, and John Cooper were doing some partying of their own from a rundown old farmhouse on the outskirts of town. “The Farm” as it became known, hosted night after night of pickin’ parties where songwriters would gather to share and create what eventually would be termed “Red Dirt Music,” named after the iron rich soil that blankets much of the state. An eclectic mix of folk, southern rock, blues and bluegrass influences, red dirt shared the same rebellious streak and adherence to unbridled authenticity as its Texas counterpart.

Back in Texas, the indie-country movement sparked by Walker and friends roared into the 80’s.  In College Station a pair of Aggies, Robert Earl Keen and Lyle Lovett, were serenading churchgoers from their front porch on Church Street. Both would leave A&M, each garnering their own form of success. Lovett attained pop culture level stardom as a songwriter, performer, producer and actor, collecting four Grammys along the way. Keen is considered by his contemporaries and successors as one of the best songwriters to ever come out of the state, with his 1996 release No. 2 Live Dinner being a benchmark record in the Texas Music scene. On the mainstream end, Texans George Strait and Kenny Rogers were in their prime with a young Clint Black on the verge of a breakthrough. Texas Musician Parker McCollum, one of the hottest names now, especially with the younger audience.

No surprise, the people of Granbury love their music. Whether its boats zipping across the lake with tube in tow or sitting around the fire pit with margaritas in hand, there’s always a tune in the air.

Lubbock and the Red Dirt Invasion

While Lubbock may always be the home of Buddy Holly, it is also without question the place where the modern Texas Music movement exploded.  Fast forward to the mid-90’s, Pat Green and Cory Morrow, two Texas Tech students with something to say, began performing at local panhandle dive bars before catching fire statewide. Both took a page from the Jerry Jeff Walker guide to showmanship, and sung songs about road trip weekends in their homeland with more fervor than any predecessor did. Almost single handedly, Green ignited a generation of musicians to pick up their guitars and make a go of writing and performing music. Entire subcultures of dedicated fans spent their weekends going from town to town to find the party anchored by acts like Green, Kevin Fowler, and Roger Creager.

Meanwhile in Stillwater, after twenty years of red dirt stewing, the pot began to boil over. Mentored by Skinner and his contemporaries, a slew of young and ambitious songwriters lit up the bars around the Oklahoma State campus.  Cody Canada’s outfit, Cross Canadian Ragweed, brought the attitude and rock ‘n’ roll, Jason Boland and The Stragglers were pure honky tonk country, Mike McClure and The Great Divide provided the red dirt tradition, and Stoney LaRue brought the southern soul. At the same time, there was a guy named Garth Brooks banging around those same beer joints, but I don’t need to explain what happened to him.

Like their Texas counterparts, Canada, Boland, McClure and LaRue sang songs that were authentic, rowdy, irreverent, but at the same time, real and visceral to a rabid, college aged fan base. It wasn’t long until the boys from Oklahoma crossed the Red River and took the state by storm. It was gasoline on the fire started by Pat Green and company. “I knew that I was in the middle of something that had the potential of being bigger than all of us,” Stoney LaRue told Lake Granbury Living. “The people down in Texas were more than accepting of what we had to offer because it was pretty similar to their culture.” Over the next decade, new blood continued flow in, acts like the Randy Rogers Band, Turnpike Troubadours, and Wade Bowen quickly rose to prominence, filling venues all over the state and the country. Annual events like Larry Joe Taylor’s Texas Music Festival and MusicFest in Steamboat Springs, Colorado popped up, where both artists and thousands of fans would get together for weeklong parties with the music front and center.

Today the scene continues to thrive. A new generation of artists have arrived, including an influx of female talent that has commanded attention from what was historically a male dominated genre. Houston native Bonnie Bishop won a Grammy in 2013 for her song “Not Cause I Wanted To,” recorded by her idol Bonnie Raitt. Other notable women that are making a lane for themselves include Jamie Lin Wilson, Sunny Sweeney, Kaitlin Butts, and Stephenville’s Courtney Patton. In the panhandle, Lubbock continues to churn out high quality talent in William Clark Green, Flatland Cavalry, and songwriter John Baumann. There’s also a sizeable “cowboy country” segment led by Cody Johnson, who drew over 60,000 on just two days’ notice at the Houston Rodeo in 2017.  Finally, there are Koe Wetzel and Parker McCollum, two bad boys that are the hottest names going now, especially with the younger audience.

With all that behind us, the final question is obvious. Where can you see and hear all this all this great Texas and Red Dirt music?

No surprise, the people of Granbury love their music. Whether its boats zipping across the lake with tube in tow or sitting around the fire pit with margaritas in hand, there’s always a tune in the air. In recent years, a bevy of live music establishments have popped up, providing a welcoming stop to Texas and Red Dirt artists from across the region. In downtown, you’ll find Bob’s Off The Square, with a great back patio ambiance regularly hosting names such as Cody Canada, Bart Crow, and Kaitlin Butts. On the square, The New Granbury Live provides an intimate listening room that has featured legendary Texas songwriter Walt Wilkins and amazingly talented Josh Weathers. Silver Saddle Saloon is a great place to grab an ice cream while watching up and comers play the main room, or venture out back to watch full bands play in the alley. For those wanting to hear familiar tunes, there’s a good chance you can catch local musician Kim Younkin covering Stevie Ray Vaughn at Kessler’s or Fuzzy’s Tacos. Enjoy your Texas music with some barbeque by heading out Acton Highway to Brock’s to see Gary P. Nunn or Tommy Alverson. We even have our own Texas Music festival, Lakefest, in the fall. If you can’t find what you’re looking for in Granbury, you have options in nearby Bluff Dale, Stephenville, and of course, The Stockyards in Fort Worth.

Bob Childers once told Stoney LaRue that the goal of any Red Dirt musician or fan should be to “spread the dirt,” meaning take the music to as many folks as possible. Granbury has embraced that mantra, so come see us, take in a live show, and party like a Texan.

END_OF_DOCUMENT_TOKEN_TO_BE_REPLACED